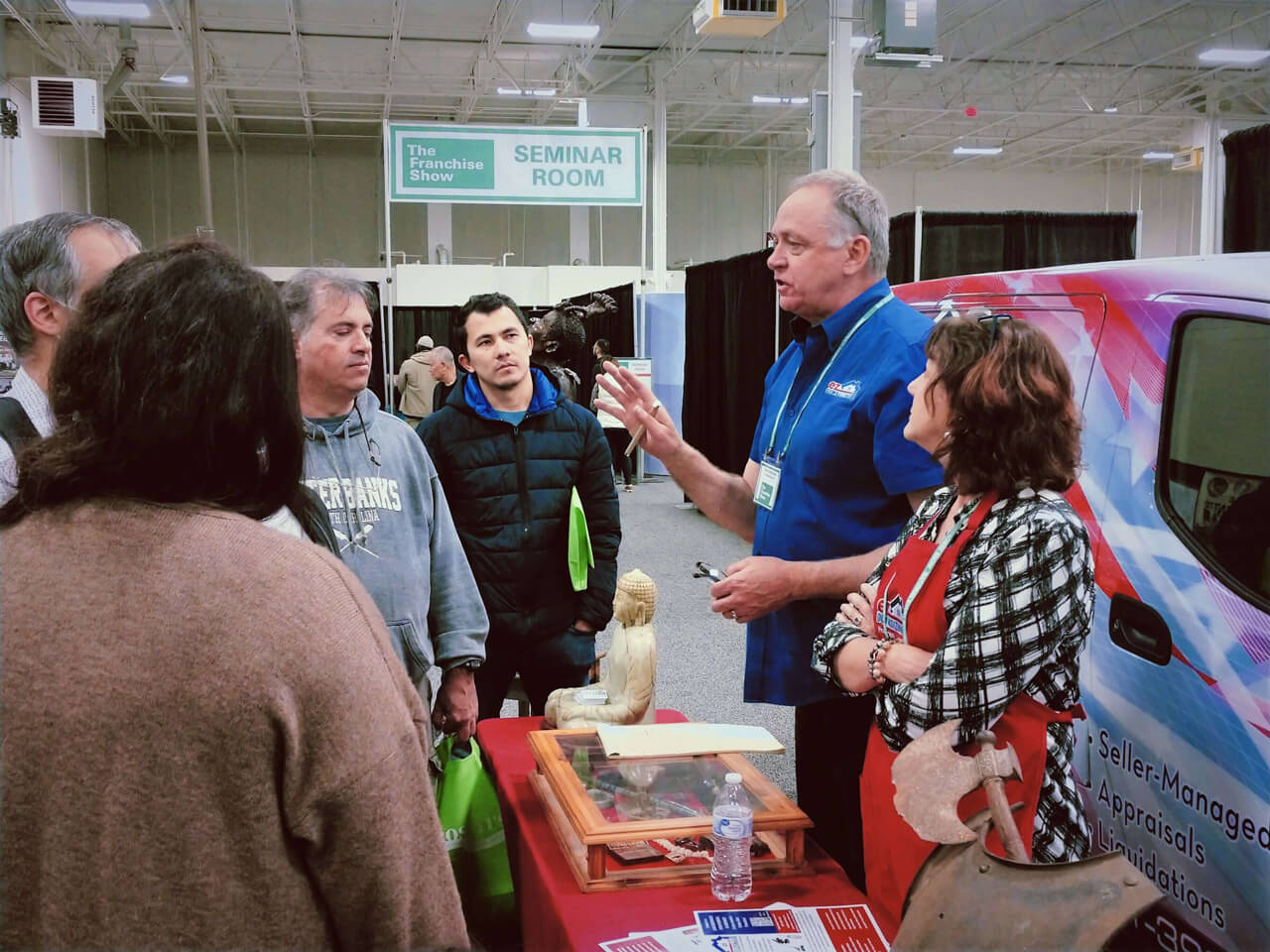 Bryan is both a certified personal property appraiser and licensed auctioneer (licensed auctioneers are required by the state of Virginia to be bonded). He brings to ezDownsizing.com both integrity and a passion for doing things right and in a manner that is a win/win and makes sense for both the company and the customer. Bryan has also surrounded himself with a team of experienced professionals who enjoy doing what they do and are consistently looking for ways to do it better.

Bryan developed an interest in buying and selling antiques and collectibles in his early teens when his parents would set up and sell items at the Flea Market in Hartville, Ohio to supplement their income.

Bryan joined the Marines in 1980 and a couple years later found himself regularly attending auctions at Don’s Auction Barn in Jacksonville, NC. The auctioneer eventually asked Bryan if he wanted to work at the auction since he was ‘going to be there anyway’. Such was the beginning of Bryan’s introduction to the wonderful world of live auctions!

When Bryan was transferred to Virginia Beach, he sought out other auctions to attend and hopefully continue with his paid ‘hobby’.  Unable to find a place willing to hire him due to  his erratic schedule as an active duty Marine, in 1986 Bryan opened up Atlantic Coast Auctions and Antiques in Virginia Beach, where he conducted two or three auctions a month – as the auctioneer.  Bryan sold the company in 1989 when he was transferred to 29 Palms, California. Bryan continued to collect, buy and sell items as a hobby at various duty station locations but was unable to commit as much time as he had previously.

In 1997 Bryan heard of a fairly new online auction company called ‘eBay’. When he was sent to Okinawa, Japan in 1998, Bryan opened an account and began selling items on eBay  under the username “orient_express”.  When he was off duty, Bryan would frequent the Japanese second-hand shops, antique stores and local flea markets in search of interesting items.

Bryan began to specialize in Japanese antique dolls (Kokeshi, Daruma, Hakata, Hino Ningyo and Musha Ningyo). The dolls were easy to photograph, describe and ship.  He later branched out to antique porcelain sake cups, kimonos, obis, woodblock prints, samurai swords and tsubas (the guard at the end of the grip of sword). Shop owners began to recognize Bryan as a prolific buyer and would often have consolidated items which they believe would be of interest to him. When Bryan returned to San Diego after a year in Japan, he had amassed considerable amount of ‘product’ to keep him engaged and selling on eBay.

After 23 years on active duty, Bryan retired from the Marines in 2003 and took a job with Science Applications International Corporation (SAIC) in San Diego as a Business Manager, Program Manager, and eventually Division Director. During his time working with SAIC, Bryan took vacation and attended training at the Certified Appraisers Guild of America in St. Louis, Missouri, and later opened American Personal Property Appraisers while living in San Diego. Bryan maintains his certification and remains active as an appraiser.

In 2011 Bryan was offered and accepted a position with Marine Corps Systems Command in Stafford, VA as an ‘Interoperability Analyst’.  After two years Bryan resigned his position to pursue his passion and opened McDaniel Auction Center in Manassas, VA, where he conducted weekly live auctions.

During that time, Bryan also purchased an existing estate sale company, ‘Smart Move for Seniors’. For the next several years Bryan successfully ran the two businesses concurrently, often bringing to auction the items that did not sell at the estate sale and affording the owner a ‘second chance’ to sell their items.

Bryan identified the best facets of his experiences as a licensed auctioneer, appraiser, eBay seller and estate sale services provider and combined their capabilities into a single business, which is ezDownsizing.com.

I have used EZDownsizing both as a buyer, but more importantly, also as a seller doing a self-managed auction sale using their platform. It worked great. My auction lots showed well on the site, and the owner was super helpful as I had questions. I’m already planning on another later in 2022.

Bryan McDaniel has set up a great website of value for me to list and run Estate Sales online and for anyone. He has assisted in every way possible for me to get the best value on items. He has spent a lot of time teaching me how to list jewelry, porcelain, and vintage glass. Without his help I would sell the items for far less. His help in organizing the sale has been invaluable.

Simply the BEST Estate Liquidation Online Auction Company in the business! I have referred many friends and associates to this company with great results. Bryan and Clay, along with their wonderful staff, have always delivered on their commitment to excellence and professionalism. I wouldn’t hesitate a minute to tell anyone that needed help settling an estate or downsizing to give them a call for a worry free solution with amazing service from start to finish.

Your Guide to Estate Sales in Northern Virginia

ezDownszing is your convenient solution for downsizing, estate liquidation, and consignment in Northern Virginia. We proudly serve the following areas: Fairfax County, Arlington, Alexandria, Falls Church, Warren County, Fauquier County, Prince William County, Loudoun County, Washington DC & the surrounding areas. Whether you’re looking to downsize for retirement, host an online estate auction, or sell individual items on consignment, ezDownsizing can help you every step of the way. Need help getting started? We offer free in-home consultations so that we can learn more about your specific needs and come up with the best plan for you.

At ezDownsizing Northern Virginia, we understand that estate liquidating or downsizing can be an emotional, difficult time. Our team of experts will eliminate as much of your stress as possible by taking on all of the heavy lifting ourselves. We specialize in comprehensive, effective solutions for even the most difficult situations. With years of experience in downsizing, estate sales, auctions, and liquidations in Northern VA, we’re uniquely equipped to help maximize our client’s revenue and minimize their stress. There’s no reason to go through the process alone, ezDownsizing is here to help!

Do you offer online estate sales in Northern Virginia?

Yes, we are happy to offer online auction estate sales for those who prefer that over a traditional in-person auction. Depending on the number of items that you have to sell and the level of service that you’re looking for, we offer a wide range of estate sale services that can help. Want to be totally hands-off and have someone else manage the entire process? Ask about our full-service online estate sales where we do all the work cataloging to managing the auction. Want to do some of the work yourself? We also offer a seller-managed online auction platform that empowers you to conduct your own online estate sale auction.

What if I only have a few items to sell?

That’s not a problem! If you just have a few items to sell, we offer consignment services with a professional appraiser who will help you get the best return possible. Some of the items that we typically take on consignment in Northern Virginia include jewelry, coins, vintage collectibles, furniture, decor, vehicles, and so much more. Give us a call today and we’ll be happy to assist you.

What is the best way to liquidate my estate?

What’s the best way to downsize for moving?

Whether you’re moving far or staying in town, are downsizing to a smaller residence or are a senior who needs help figuring out which items to keep and which can be sold, ezDownsizing is here to help. For most people, the best solution to maximize return and sell all of your items is going to be an estate sale. If you’d like some help or are ready to get started, contact ezDownsizing Northern Virginia today.